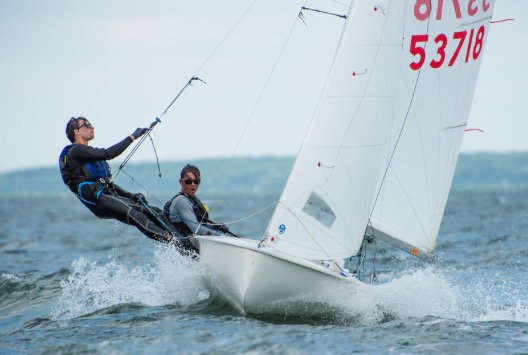 Austin Ando (skipper) and Cameron Gise (crew) have qualified for the 2016 US Sailing Youth Championships to be held in August in San Diego, CA. This high-level regatta is by resume only and acceptance was based on sailing performance on the national level for the past year. This World Championship Qualifier regatta is limited to the top 114 boats in the nation and the top 31 International-420 class. Austin and Cameron are the only sailors in South Carolina and the only I-420 sailors in the entire SAYRA region to qualify to sail in this national invitational regatta.

Austin and Cameron compete in a double-handed, mono-hull dinghy called the International-420. The 420 is equipped with spinnaker and trapeze, making teamwork crucial to sailing it well. Sailing this boat requires athleticism, smarts and experience as the playing field is constantly in motion.

Austin and Cameron are members of Hobcaw Yacht Club, South Atlantic Yacht Racing Association (SAYRA) and US Sailing. Both are experienced sailors who learned to sail at Hobcaw Yacht Club and were members of the Prime Optimist Team. Austin and Cameron have both sailed nationally and internationally and were on the US Optimist National Team. They have both competed multiple times for Team USA at international regattas, such as Palamos, Spain; Portland, England; Lake Garda, Italy; Bermuda; Canada and Australia.

In addition to sailing the national circuit, they both sailed for Wando High School the past 2 years. Austin skippered “A” division and Cameron skippered “B” division for the Wando Team. Since joining the team in 2015, Wando qualified for High School Nationals for the first time in history in 2015 and then qualified for a second time in 2016. In 2016 at the district qualifier, they not only qualified, but won first place in the district, which is comprised of all high school teams in NC, SC, GA, TN, AL, FL and the Caribbean. Austin and Cameron skippered all races at district championships. At National Championships, Wando emerged as the 9th best high school sailing team in the nation with Austin and Cameron skippering all races.

This year we celebrated a major milestone – our 15th year of serving the Lowcountry.…