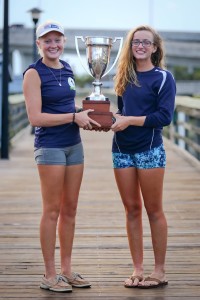 This year was the first annual Community Cup hosted by Charleston Community Sailing and the Charleston Yacht Club. The Community Cup is a youth sailing regatta that is meant to foster a competitive Corinthian sailing spirit in the Charleston harbor. The regatta is open to all junior classes and youth sailors. During the regatta a committee oversees the races and deems which class was the most competitive and the winner receives the Community Cup.  The regatta kicked off with a fun big boat race in which CORA boats took 25 youth sailors out on a twilight race along the Ashley river.  Following the race, sailors and parents gathered on the back porch of the for ice cream donated by Republic Ice Cream on King Street.  While the sailors and parents enjoyed their treat we conducted our skippers meeting for the following days’ racing.

On Saturday morning our race committee and principal race officer Scott Bartley, led the fleet of 39 young sailors onto the race course. The wind may have left a bit to be desired but the competition was at gail force. After a long day of tough conditions and 23 races later the sailors headed home to derig and get ready for the awards banquet and dinner. Saturday night the flag room was filled to the brim with youth sailors and their families. A fantastic meal was donated by Hyman’s Seafood on Meeting Street.  Awards were given out to the top sailors of the seven classes that competed and included Opti Green, Opti Open, Open Bics, Laser Radial, Laser Full, Collegiate 420 and Club 420.  After analyzing the races , scores and  over all performance, the Community Cup was awarded to the Club 420 spinnaker and trapeze division. The recipients of the 2016 Community Cup are skipper Sydney Register and crew Sarah Deloach.  All and all it was a wonderful event that we could not have done without the generous support of the Charleston Yacht Club, its members and all of our volunteers.

Check out our newsletter to see what is happening in May!

Check out our newsletter to see what is happening in MAY!

Check out our newsletter to see what is happening in September!